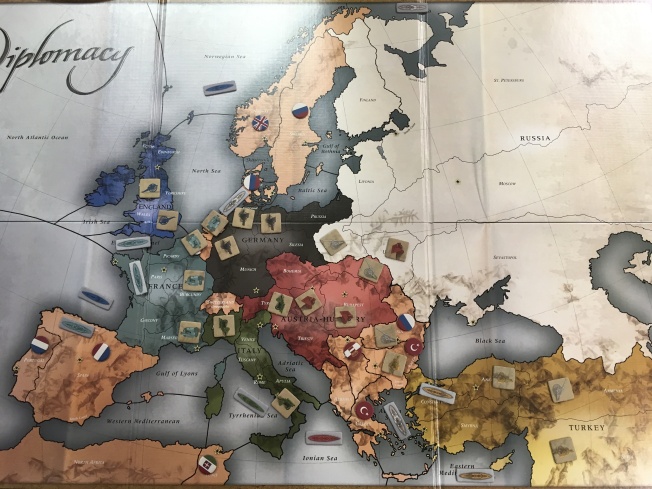 The game started off with clear advantages going to Russia and France, however that lead was quickly taken from them by mistakes.

It’s hard to say at this point of the game who would actually prevail. Some safe conclusions can be made though.

Austria-Hungary is in a tight spot and surrounded by enemies on all sides except for Germany who is being constantly pushed on by France. It is interesting though as while Austria fights Russia, Germany is Russia’s friend.

The only reason Germany survived as long as it did is due to military mistakes on France and England’s part. France with forgetting to support with all its units available and England having trouble convoying its own units.

While Germany and Austria fight for survival, Italy watches on the side, poised to steal land, but still refuses to choose land. at one point it even threatened France, which could have been devastating and yet it pulled back.

Russia once powerful lost territory to Turkey and opened itself to multiple fronts. It currently stays strong, however the nation made several mistakes in 1903 that cost it’s imminent victory. Now as Turkey grows stronger, Russia’s easy victory has been taken away.

Turkey started off weak, but once it got a handle on the game it quickly began to push Russia back and is poised to take more then just Bulgaria and Greece.

If the game was to continue I would assume Germany and Austria-Hungary would be finally wiped out. From there it all depended on how much land the other nations could grab up. Then it’d be anyone’s game again.

Unfortunately time ran out. The students all learned a lot from playing and are now enjoying their Summer Break before Middle School.

Until the next board game, thanks for reading everyone!

The teacher I was working with on this got sick near the end of the school year and we unfortunately could not finish the game.

Below is the final turn I had notes on, Fall 1903. The next post is the conclusion that I created to close out the series.

If given more time I definitely would have continued the series.

Good news though! The students left the class excited to play this more and I am confident many of them will enter the world of board gaming! So, it was not a complete waste of time in the end.

Here is the picture from the previous year and the orders for Fall are below. Enjoy the final turn. 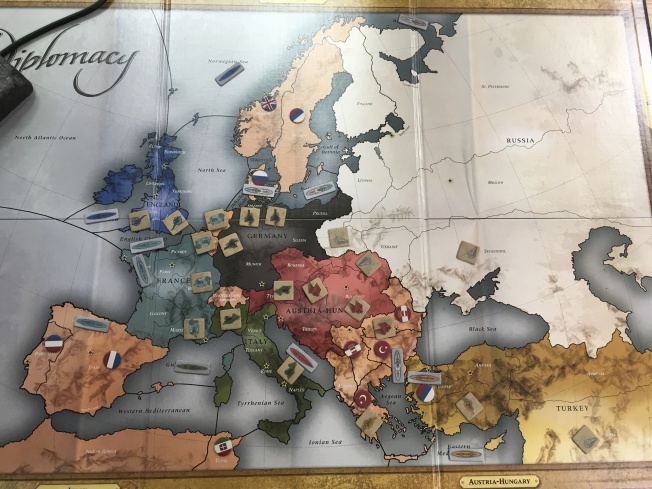 England: The army in Wales moves up to Liverpool while the other in London holds its position.

The fleet in the Irish Sea moves into the Mid-Atlantic Ocean. The second fleet in the Norwegian Sea attempts to move into the Barrents Sea and pumps head with the Russian fleet there with no success.

France: Moves its army from Burgundy to Munich and Belgium to Ruhr.

The army in Holland supports the army moving to Ruhr.

Its army in Marseilles moves to Burgundy. 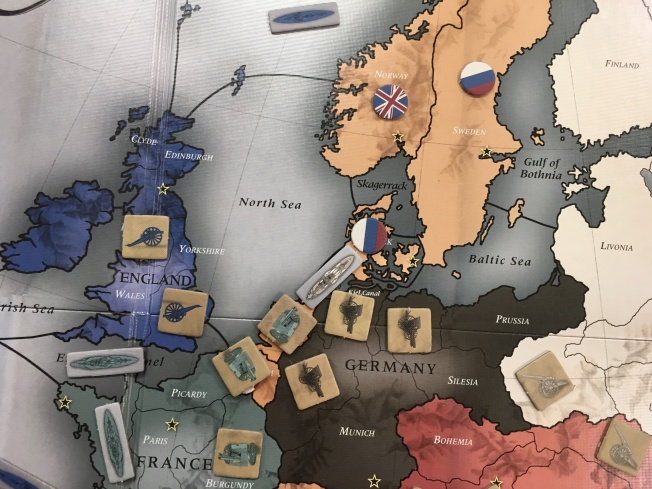 Germany: Its army in Kiel moves to Holland

The army in Ruhr supports the army moving to Holland, but is cut off by the attack on Ruhr.

The last army in Berlin moves into Munich and is pushed back, but successfully pushes France back.

The stalemate continues between France and Germany with Munich staying open to attack.

Italy: Moves its army in Apulia to Naples.

The army in Piedmont moves to Marseilles, but is unable too due to the French army failing to move north into Burgundy.

The army in Tyrolia holds position.

The fleet in the Gulf of Lyons moves away from France in a surprising move and enters the Tyrrhenian Sea.

Austria-Hungary: Moves the fleet in the Adriatic Sea to the Ionian Sea

The army in Vienna holds.

The army in Budapest moves to Galicia while the army in Romania moves to Ukraine. 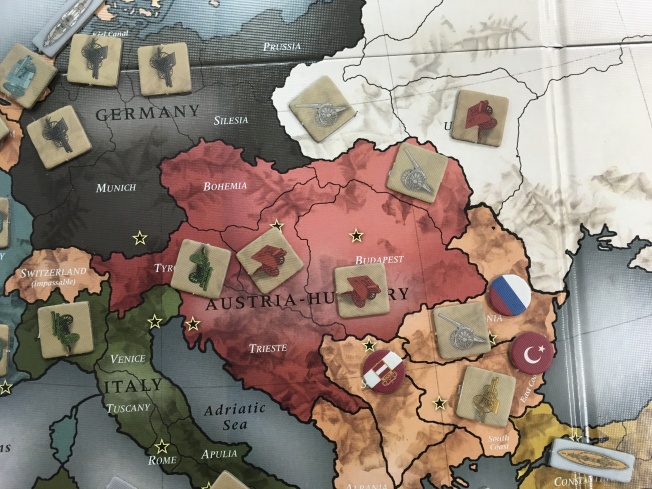 Russia: Moves its army in Sevastopol into Romania.

The fleet in southern Bulgaria attempts to support Romania, but is along the southern coast and unable to reach.

The army in Syria moves to Armenia

The army in Galicia moves to Vienna but is pushed back by Austria.

The fleet in Denmark moves into the Heliogoland Bight.

The fleet in the Barrents Sea tries to move into the Norwegian Sea but is pushed back by England.

Retreats – The fleet in Bulgaria is forced to retreat to the Aegean Sea.

Turkey: Smyrna’s army moves into Syria with support by the fleet in the Eastern Mediterranean.

The army in Greece moves into Bulgaria with support from Constantinople’s fleet. 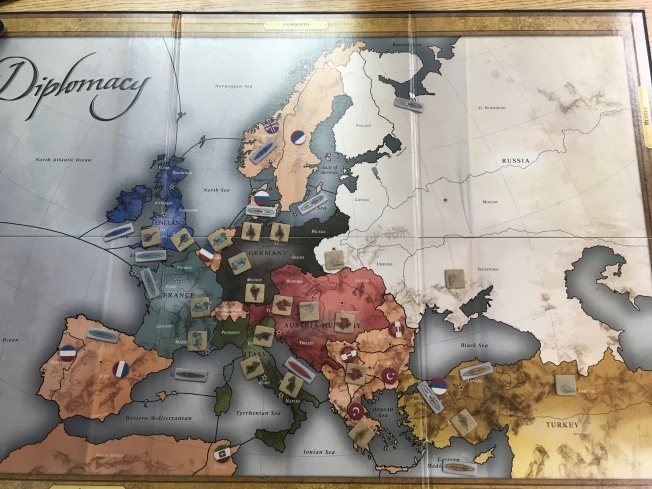 England: Moves its fleet from Norway to the Norwegian Sea. While the other fleet in Irish Sea moves into the English Channel and is pushed back by the French fleet there

The two armies continue to hold position along Wales and London.

France: Tries to move its fleet from the English Channel to the North Sea but is pushed back by the Russian fleet from Denmark.

The army in Ruhr attempts to give support for the army moving from Burgundy to Munich. The attack fails from the oncoming German attack.

Germany: Sends its army in Munich to Ruhr with support from the army in Kiel.

The army in Berlin moves into Munich and is forced back but not without pushing the French army back to Burgundy. 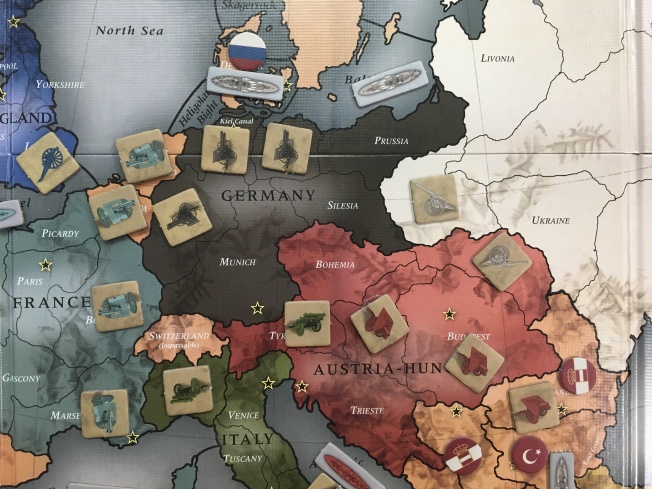 Italy: Moves its army in Tuscany up towards Piedmont

The army in Venice moves to Tyrolia as the Austria-Hungary army there leaves for Vienna.

Austria-Hungary: The army in Tyrolia moves into Vienna with support from Budapest, dislodging the Russian army there.

The army in Serbia moves to Rumania

The fleet in the Adriatic Sea holds position.

Russia: Its army in Armenia moves down to Syria.

The army in Sevastopol holds position.

The fleet in Constantinople moves to the Aegean Sea and is pushed back by the Turkey fleet attempting to move there from the Eastern Mediterranean.

The army in Warsaw attempts to move but is given a wrong order and stays in its position.

The fleet in the Baltic Sea moves to Denmark while the fleet in Denmark moves to the North Sea. Due to French movements from the English Channel, both fleets are forced back into their original position.

The fleet along the north coast of St. Petersburg moves into the Barrents Sea.

The army in Vienna retreats to Galicia while the fleet in Constantinople retreats to the south coast of Bulgaria. 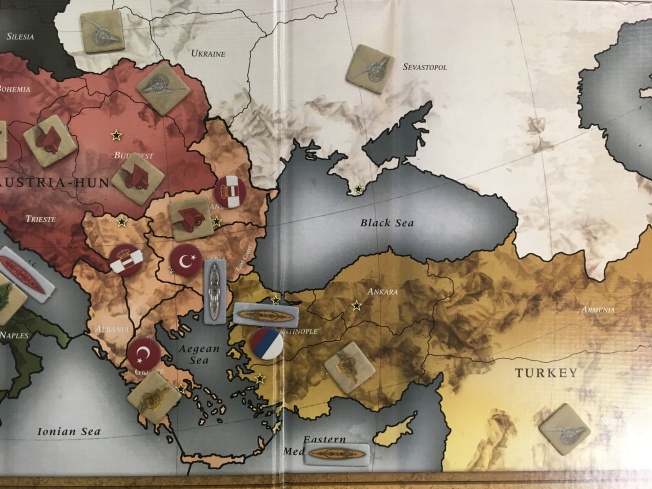 Turkey: The fleet in the Eastern Mediterranean fights with the Russian fleet in the Aegean Sea then returns to position.

The army in Ankara attacks Constantinople with support from the army in Smyrna. The attack is a success.

buzzing about board games